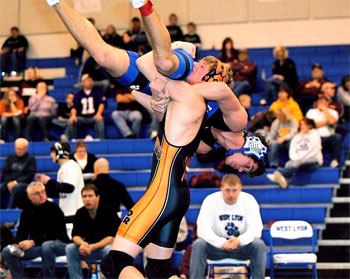 Quarrier (Preston Munk, 31 wins/8 losses) takes Austin Bruggeman (West Lion High) into the air for a takedown during their 145 lb semifinal match at the West Lyon Invitational. Munk went on to win by pin in 1:32. Preston took 2nd in this meet and placed 7th in the state wrestling tournament. Photo by Mike Smith/MatShots Photos.

The Dell Rapids wrestling program and Preston Munk received national recognition in March 1, 2007. A picture during his match at the West Lyon Wrestling Invitational was chosen for the cover of Wrestling USA. Wrestling USA (www.wrestlingusa.com) has been the national voice of amateur wrestling since 1965 (see promotion).

When events and conditions come together for an extreme outcome, the current expression is a “perfect storm.” Lifting someone your own weight above your head, as they are trying to do the same to you is an extreme event.  Seeing a picture of it is why people say “a picture is worth a thousand words.” I remember my first experiences seeing competitive high school wrestling and wrestling for fun in grade school. The feats of strength and quickness by older wrestlers were exhilarating to watch and created crowd excitement I had not felt before.  When I wrestled with my grade school friends, pitting my youngful strength against their’s, I imagined the day I would feel the exhilaration of great strength and competition as I lifted up my own opponent for a fall.  I pictured myself just like Preston in his cover picture.

Seeing the cover caused me to reflect on my renewed excitement about wrestling and about the excitement the picture caused in others.  What was the meaning of this excitement? On one hand, the photograph is a result of “being in the right place at the right time.” The Quarrier wrestlers, the West Lyon wrestlers, Preston, Austin Bruggeman (Preston’s opponent), and Mike Smith (MatShot photographer) all converged as Preston raised his opponent on his shoulders. The photographer clicked his camera, and decided he had a prize winning cover photo. Was this picture about something more than a coincidence? Was the picture about more than being in the right place at the right time?

Finally, I began to understand the significance of the picture. The picture represented the enthusiasm of wrestling fans and the commitment each wrestler makes to his sport, his coach, his team, and to himself. Preston was wrestling that day, because he had the “right stuff” and did the “right thing.” He put in the hard work to wrestle for his team, and he developed uncommon strength for his size.  Most of all, the picture represents the hard work of all wrestlers and the enthusiasm of all wrestling fans.

This enthusiasm is exemplified by the photographer, Mike Smith, and the unique volunteerism of past wrestlers.  Mike Smith, a wrestling parent from Hartford, started taking photographs of local area matches and his interest has grown into taking photographs at state and national events.   Recently, Wrestling USA magazine sponsored his press pass to the World Team trials. The World Team qualifiers went on to compete in China.

For Dell Rapids, Preston’s cover picture is a great reminder to parents and students about the unique benefits of wrestling.  For the athlete, it is a sport of personal challenge, strength, and commitment. For the fan, it is a lifetime of excitement, service, and fellowship.